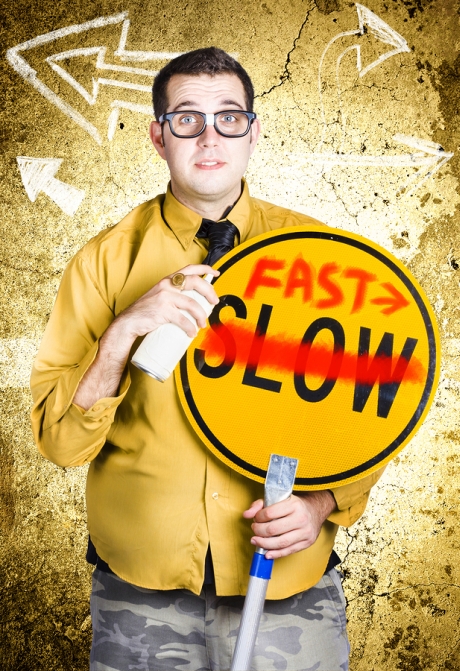 I’d always held to a view that it takes a long, long time to develop a foreigner’s English pronunciation to a degree where one’s foreign accent has almost disappeared and others might actually mistake that person for a native English speaker.

In all honesty, I believed it almost impossible unless one had moved to an English speaking country at a very young age OR some very expensive accent reduction classes are attended which would set you back by a couple of thousand bucks at least!

Ever since I’ve been running this blog, however, I’ve come to realize that fast accent reduction isn’t something that only Hollywood actors or highly paid professionals can avail of. In fact, I strongly believe that ANY FOREIGNER can pull it off in a relatively short period of time – provided, of course, that the right English pronunciation improvement strategies are put into practice!

But what does it take to improve your English pronunciation FAST?

And how does it compare to more profound, more extensive accent reduction routine that might take you a couple of years – if not more?

A very valid concern one might have is – will QUICK accent improvement results last forever or is it going to be just a quick-fix solution instead of giving you a permanent, lasting native-like American or British accent?

Perfecting Your English Accent Over a Long Period of Time: PROS

You’ll learn the entire International Phonetic Alphabet and you’ll know how each and every single one of those symbols – θ, ð, ɒ and others – are called.

You’ll learn how to pronounce all those special symbols individually and you’ll know which English words contain this or that particular sound due to extensive studies focusing on word and sound analysis.

You’ll be able to discuss various English pronunciation related issues at length because of the large amount of academic information you’ll gather over the course of your pronunciation and accent reduction studies.

After a good number of years you’ll probably sound just like a native English speaker and you’ll take great pride in it!

Perfecting Your English Accent Over a Long Period of Time: CONS

You’ll waste years of your life achieving PERFECTION in English pronunciation instead of enjoying FAST and decent results and reaping benefits of your newly-acquired American or British accent right NOW.

There’s a risk that if you put equal focus on ALL English sounds – which would often be the case of extensive studies – you may actually impede your pronunciation development.

Most likely you’ll develop the typical perfectionist attitude towards anything English pronunciation-related whereby you don’t accept anything less that high standards from yourself and also others.

You’ll sound almost like a native English speaker after a relatively short period of time – you can expect decent results after a couple of months!

You’ll enjoy rapid accent development and while your speech isn’t going to be perfect, your chances of improving your social and professional life are going to increase drastically!

Your foreign accent will take care of itself because you entire focus is going to be dedicated to native-like pronunciation acquisition.

You’ll be able to focus on and achieve other things in your life as well because your English accent improvement isn’t going to take up long years leaving no time for other things you may want to accomplish!

And most importantly – your fast development will spur you on to stick with your accent learning routine and persevere with your spoken English self-practice which is the crucial part of accent reduction and pronunciation improvement.

You’ll be making small pronunciation-related mistakes here and there while speaking in English because you’ll be focusing on the entire speech and making sure your overall pronunciation is OK instead of worrying about tiny little details.

People will still be able to spot the foreign accent in you – but then again, you will also be complimented for how good your American or British English is!

Your chances of being cast for a role in a Hollywood movie alongside A-listers are going to be smaller because you won’t have developed your American pronunciation to perfection. But then again – has it prevented actors such as Antonio Banderas or Arnold Schwarzenegger from becoming highly successful in the movie industry?

If you asked for my personal opinion, I’d definitely tell you to go for fast accent learning results aiming for 70 – 80% of the native-like pronunciation level in short term.

Once you’ve that looked after, you can spend pretty much your entire life improving and perfecting your target English pronunciation, but most importantly – your fast pronunciation improvement will inspire you to achieve even more in the future!

If you go for thorough and more profound English pronunciation studies, you may find it much harder to stay motivated because your results will come slower – mainly due to the amount of extra information you’d be required to learn over the course of the studies.

Now, would you like know how to improve your English pronunciation FAST?

Then you should definitely check out the Accent Genie Program that will look after the 80% of native-like level of your target English pronunciation in a short period of time!

Next post: It’s Totally OK if You Lose Your Target American (or British) Accent Sometimes!