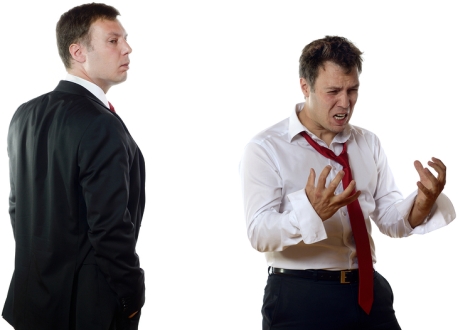 1. Your Own English Pronunciation Wasn’t Perfect in the Beginning!

Unless you’re exceptionally gifted in terms of accent acquisition, the chances are that your English pronunciation wasn’t always as good as it is now 😉 Your pronunciation changes over time, and the simple truth is that the more you speak, the more native-like your pronunciation becomes.

Sure enough, there’s probably no way for you to tell what your pronunciation was like 3 or 5 years ago, but I’m pretty sure that if you heard a few years old recording of your speech, you’d notice a considerable difference!

I’ve had the same experiences, and I don’t even have to go as far back as 5 years. I only have to check one of my YouTube videos done a couple of years ago to hear how different my speech is to the way I speak currently.

The point is – you weren’t that good right from the get-go, so you have to understand that if you hear someone speaking with a heavy accent, most likely they haven’t been speaking in English for as long as you have. And even if they have, it still doesn’t justify your judgment because…

This is one of the biggest misconceptions among native and foreign English speakers alike. Just because good pronunciation and lack of foreign accent is a trait of a fluent English speaker, many foreigners speaking with heavy accents are automatically treated as struggling English speakers.

Well, don’t get me wrong – I’m not saying it’s not always the case, it may very well be that a foreigner who’s speaking in heavily accented English is just a beginner English student (but then again – does it give you any rights to look down on someone who’s less experienced in ANY practical skillset?).

It’s beside the point however, because the simple fact remains – a foreigner speaking with a heavy foreign accent may as well be a very, very fluent English speaker (check out Antonia Banderas’s accent, for example) so there’s no reason why you should treat someone who can’t pronounce English words in the same native-life fashion as you can as if their English wasn’t good enough.

3. You May Seriously Damage the Other Person’s Confidence!

We don’t normally think in these categories, but any word we say and every look we cast upon other people has a great potential either to boost their confidence to incredible heights or bring them down big time and make them feel totally useless.

Believe me – I know what I’m talking about because I have a first-hand experience in this!

You see – I’d been struggling with my own English fluency for a long time, and others’ negative attitude definitely didn’t help me overcome my confidence issues.

If anything, it only exacerbated my problems to a degree I couldn’t say anything meaningful at all because I was so conscious of my speech imperfections!

There’s an old adage that goes something along the lines of: “Don’t treat others the way you wouldn’t want to be treated”, and I couldn’t actually agree more in the context of someone showing his or her superiority in terms of proper English pronunciation.

Just try to put yourself into that person’s shoes for a moment, and try to imagine how you’d feel if someone was being condescending towards you because of their superiority in a certain skillset. That attitude could really hurt, and it could potentially render your skills totally unworkable!

Well, it has happened to me on a number of occasions, and it just goes to show that you can never be sure!

I remember having a conversation with a fella from Spain, and in the beginning I was convinced he was a local. Not that I judged him for his strange pronunciation, it’s just that it immediately stood out and identified him as what I thought was a Spaniard. Little did I know that he was a British fella living in Spain (some British accents can be very distinct), and it just goes to show that life can be full of surprises!

The bottom line is the following:

you never know who you’re speaking with, so don’t make any hasty judgments! And best of all – don’t pass ANY judgment on the other person’s accent and pronunciation!

5. Everyone Has the Right to Choose How to Speak!

It’s 100% up to every individual as to how they’re speaking in English.

If they choose to speak with a hard accent – that’s fine!

If they choose to learn to speak with a native-like accent – fair play to them!

Just because you’re enthusiastic about perfecting your pronunciation, doesn’t mean others HAVE TO embrace the same approach towards their English!

Sure enough, I’m one of those enthusiasts myself, but here’s the thing – I’ve never tried to push my agenda with my fellow foreign English speakers. I’ve always reiterated the importance of maintaining fluency and not compromising your ability to speak fluently while trying to achieve an almost perfect pronunciation, and just the fact that I’m running this blog doesn’t mean I’m one of those perfectionists!

You can read black on white exactly why I’m running this blog HERE, and as you can clearly see a need to feel somewhat superior definitely isn’t among the reasons why I’m doing this!

Previous post: Omit Vowels & Pronounce Word Endings as Fast as You Can in Order to Sound British!