Speaking English While Thinking WHAT and HOW You Say It at the Same Time Ain’t That Easy! 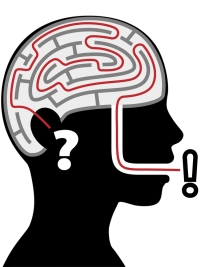 In this blog post you’ll find out the following things:

If you watch this video which is the first one in my General American Pronunciation series, you’ll definitely notice that my speech is slower than normal (for a good comparison, watch this video where I’m speaking with my native East-European accent).

Here’s the thing – accent learning or the so-called accent reduction (which is a term I hate – read here why!) isn’t something you can just learn and then apply that skill when you’re speaking in English ❗

Accent learning requires you to be MINDFUL of HOW you pronounce certain sounds and words in English, and quite naturally you can’t speak as fast as you normally would while doing two things simultaneously – focusing on WHAT to say and HOW to say it.

A long time ago I noticed that if I don’t force myself to pronounce English words correctly and speak with a native-like accent, I find it much easier to express myself in English.

At the time it seemed weird, but now I understand what’s happening behind the scenes when a foreign English speaker is trying to speak in English with a proper pronunciation HAVING learned the language at school in his own country where nobody pushed him through pronunciation drills in the early stages of the English language acquisition.

Once you’ve LEARNED to speak English with your FOREIGN ACCENT, that’s the way you’re going to speak, and that’s when your English is most fluent.

If you’re trying to maintain the same fluency while focusing on pronouncing English words the way native speakers would pronounce them, quite naturally you can’t speak as fast and your thoughts seem to be scattered simply because you’re performing two mental tasks at the same time – SPEAKING and CHANGING THE WAY YOU SPEAK ❗

I’ve always said that it’s not the accent and pronunciation that defines you as a fluent English speaker – it’s rather your ability to express yourself adequately.

If you aspire to speak English with a more native-like accent, however, you have to understand that you won’t be able to speak as fluently as you’d normally speak. You have to be prepared for a much slower speech filled with a lot of gaps because you’ll be paying much attention to your mouth, jaw and lip movement and also sound production.

Be Cool With Your Slower Speech
While Learning an Accent!

You’re making good progress and you want to show off your American English to others! 😀

The moment you get out there and start speaking with others, you may face the following dilemma:

You see, the problem is that it can be mentally challenging to come to terms with the fact that all of a sudden you’ve lost your ability to speak at your normal pace. Your subliminal reaction might be to try to match your normal speech while at the same putting on your target accent – American, British or whatever else it may be, but as a result your speech becomes hesitant and riddled with errors.

The solution is to realize that it’s OK to speak at your own pace while learning a different accent and not try to match other speakers in terms of speed and fluency.

Remember – it’s mostly yourself who’s thinking that your speech is too slow! Others won’t mind, especially taking into account you’re sounding more native-like. People will perceive your American accent as a sure sign of fluency and they’ll ignore the fact that you’ll be pausing every now and then to gather your thoughts.

Filling Pauses While You’re
Thinking of What to Say

Yes, people won’t mind that, yet at the same time you may want to learn a few phrases that will come in handy when you have to fill in a pause in your speech.

Of course, it’s not going to make all the difference between failing and succeeding at accent learning.

Yet it’s very important to understand that it would make you feel more comfortable while speaking thus increasing your chances of succeeding at accent acquisition!

On top of that, such filler phrases provide a perfect opportunity to get into the feel of your target accent because:

Let’s take the same phrase we already looked at – “Well, let me see”.

Seems like a very, very simple phrase; does it even warrant a second glance?

Yes, it does, and here’s why. The ‘w’ sounds are one of the most important American English sounds along with the ‘l’ sound. When you pronounce the ‘w’ sound, you form the sound from deep within your mouth and you also inflate your cheeks a little – and it’s exactly what you may want to bear in mind the whole time when speaking like an American.

The ‘l’ sound isn’t so different except for the tongue placement – its tip touches the top of your mouth right behind your teeth – and it’s also a very distinct sound when you’re learning the General American Pronunciation.

As you can see, the phrase “Well, let me see” contains 2 anchor sounds and it serves as a perfect reminder of a proper mouth position provided that you’ve memorized it previously while practicing your American accent.

For more such and similar phrases that can be used as hesitation fillers please refer to this article: English Small Talk Phrases.

Previous post: Progress of my American English + Why Self-Practice is So Important