Phonetic Transcription is Too General If You Want to Get Your English Pronunciation Right! 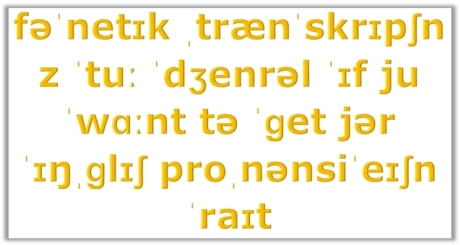 I used to read and follow the phonetic English transcription for years, and I was pretty good at it.

I used to transcribe all new English words phonetically in my pocket dictionaries so that whenever I repeated them, I’d be able to read them just right.

I used to boast about my proper ‘TH’ pronunciation and I would show others how to pronounce this unique English sound which is probably the most difficult one for foreigners to get right.

All in all, my English pronunciation was quite good, and the phonetic transcription didn’t start bothering me up until I started running this website. You see – the moment I looked into details and intricacies of the American and British accents, I realized that…

…the traditional phonetic transcription is just too general and native English speakers don’t necessarily speak like that in real life!

If you look up any American English dictionary, the word FAMILY would be transcribed the following way:

MEMBER, on the other hand, would have the following transcription:

Fair enough, but then I couldn’t figure out for quite some time as to why people were commenting on my YouTube videos where I was trying to speak with the American accent by saying that my ‘A’ letter pronunciation isn’t just like that of American English speakers!

I mean – I was trying so hard to get it right, and I was following the phonetic transcription to the letter, so why on earth would anyone say my ‘A’ letter pronunciation wasn’t quite right?

Turns out the phonetic transcription can’t always be trusted!

FAMILY should actually be pronounced as /ˈfɛmli/, and so should the most commonly used word AND – it’s actually /ɛnd/ instead of /ænd/ which you’d see in any English dictionary you can get your hands upon ❗

The moment I realized I should trust my ear rather than phonetic transcription, my American pronunciation started improving rapidly, so read the rest of this article if you’re also serious enough about your American or British pronunciation!

Certain English Sounds May Be Pronounced Differently In Real Life!

Just like with the example above, there’s a host of other sounds that just don’t follow the formal IPA (International Phonetic Alphabet) rules and regulations.

If you look it up in any American dictionary, the phonetic transcription given is /kɑr/. A one-syllable word, something so simple and common you wouldn’t even think twice before moving onto more complicated, longer English words to look into their pronunciation, isn’t that right?

Hold your horses my friend!

Even such simple words as CAR may be pronounced differently in real life!

While I was working on my own American pronunciation, I realized that CAR and a bunch of similar words:

are actually pronounced as if they were spelled with the letter ‘O’ in them:

Well, the real life pronunciation isn’t so extreme either, but the sound that you have to form to sound like a real Midwestern American speaker would be somewhere in between CAR and COR – /kɑr/ and /kɔr/.

Same goes with the word PARTNER, for example.

Any dictionary will tell you it’s /ˈpɑrtnər/, but if you want to get it 100% correct just like in General American Pronunciation, then you have to adjust the /ɑ/ sound and make it sound with a hint of ‘O’ in it.

Some of you may argue it’s only a tiny little difference, and that it’s not that important; after all – if one’s English pronunciation is decent, why bother about such relatively small details?

I already said in the beginning of this article that for the purposes of getting your English pronunciation right the phonetic transcription is fine.

It’s only when you aspire to sound JUST like a native English speaker these intricacies become quite important, but then again – that’s the scope of this blog and you wouldn’t have visited my website if you weren’t interested in such details, isn’t that right?

“Where did you go?” is phonetically transcribed as /wɛr dɪd yu ɡoʊ/.

When you speak with real people in real life, this phonetic transcription is only half-correct!

“Where did you go?” becomes “Where didja go?” when spoken fast, and it would be best represented by the following string of symbols: /wɛr dɪdʒya ɡoʊ/.

Similar world-blending happens all the time when you speak real English in real life:

Yes, I’m aware there’s a host of slang expressions in English, so “I’m going to” turns into “I’m gonna” when slang is introduced.

All the above examples, however, are representative how the ACTUAL PRONUNCIATION changes when you speak fast, and “Do you want to do it?” does actually become “Do you wanna do it?” without changing the actual words – the pronunciation changes by itself because your mouth quite naturally wants to do it!

So the point I’m trying to make here is the following:

If you ONLY go by formal phonetic transcriptions, they’re not going to reveal all intricacies of the proper English pronunciation.

They’re good enough for you for as long as you just want to make your English sound right, and that would be most likely happening in the early stages of your English learning and pronunciation acquisition.

When you further your speech and move onto the more advanced level, however, phonetic transcription just isn’t enough, and you need to start doing all the following:

And so it happens that I’ve created an American Pronunciation Video Program that incorporates all the aforementioned principles. So if you’re interested, you’re welcome to check out the Accent Genie Program HERE – it will improve your English pronunciation faster than you thought possible!