5 Reasons Why I LOVE American Pronunciation 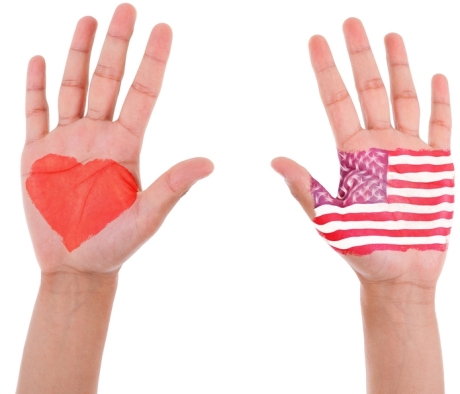 I’ve been learning to speak like an American for a good while now – since August 2012, to be more specific! – and one thing’s for sure – I wouldn’t be able to maintain my accent training routine if not for the love of the American pronunciation ❗

Yes, yes, I know there isn’t such a thing as just one American pronunciation; there are plenty of regional accents and even the Midwesterners whose speech is the closest to the General American Pronunciation don’t all sound the same.

I’m not too worried about it, however; first of all – I can’t afford being too specific when aiming for American-like sound and secondly – it doesn’t really matter if the accent in question is Californian, New York or Midwestern. It’s still going to be identified as American ANYWAY!

OK, here we go with a list of reasons why I LOVE the American Pronunciation, hope you share a thing or two from this list with me! 😉

When you speak like an American, your mouth resonates the sound an awful lot more than if you were speaking with some other accent. The resulting voice is richer, louder and also adds character to your persona that otherwise wouldn’t have been there!

By the way – a while back I recorded a video where I’m showing how to create that kind of resonating effect by taking some water in your mouth <– check it out here!

Reason #2: American Is Easy To Understand!

Please bear in mind – I didn’t say “easier than… (followed by some other English pronunciation)” nor did I say “the easiest”. Yes, there are plenty of other accents that are as easy to understand as when Americans speak; however, you have to agree at least on the fact that Americans do speak quite clearly thus making it quite easy for us, foreigners, to make them out!

English is the world’s language – it’s a fact hard to dispute. Also, American is the most widely represented type of English speech in the media (I’m talking about movies and music, of course!), so no wonder I’ve grown fond of something that’s literally permeated the modern world! I suppose the emotional reasoning behind this whole thing goes something like this – “All these superstars and celebrities are cool, they speak American, and so American is also cool!”

Reason #4: American Is Quite Phonetic

A fully phonetic language is the easiest to learn – you read everything as it’s written. It’s a whole new ballgame when we learn English of course – all the funny spellings and irregularities – so needless to say, the English language is not phonetic at all. American, on the other hand, has become more phonetic lately – they’re getting rid of unnecessary letters in words and so on (“colour” is “color” in American, for example) – which appeals to me for sure!

Yes, I do love the United States of America. Maybe you’ll think I’m just an idiot who loves an image instead of a real place where I’ve never been in my life. So what? I love it nonetheless! I dream that one day I’ll be able to travel to New York, visit Grand Canyon, and also go to other popular American travel destinations, and I don’t think I’ll be disappointed by a bit when going there in person.

Yes, it’s modern nowadays to hate the US, but here’s the thing: I’m not talking about politicians or foreign policies in the context of this article. I’m merely stating that I love the country as a place. So it’s only natural that its people with their accent also get some of that affection from my part!

Previous post: Nailing the Final Nail on the “No English Fluency With Foreign Accent” Myth Coffin!