Why Americans Speak With a Hot Potato in Their Mouth & How It Can Benefit You! 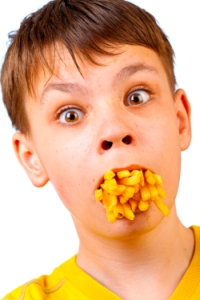 Quite a few foreigners have told me that American English is the easiest to understand, and I can see why it might be the case (I’m not talking about regional accents, of course, but the language you can hear on TV news broadcasts, for example).

Of course, American English speakers are capable of speaking a lot faster than your average news broadcaster whose primary goal is to be understood by the audience (hence the slower speech). Also, you wouldn’t have to push your comprehension to its limits when listening to Sky (British) or RTE (Irish) news broadcasts because they also have to adhere to the same guidelines.

Yet I don’t think it is disputable that the average American speaks slower because of the aforementioned 3 reasons, so read the rest of the article to find out how it can benefit you ❗

Fast speech is often mistaken for a sure sign of fluency in the English language, so it’s no wonder many foreigners aspire to speak very fast to be perceived as fluent English speakers.

But here’s what happens when you’re trying to speak faster than you’re actually able to:

As you can imagine, there’s a very simple cure to deal with these problems. You just have to slow your speech down!

It can be done in a number of ways. You can pause. You can pronounce words slower. And then there’s the American accent which is just the perfect way of speaking in order to prevent all these fluency issues!

Basically it boils down to this – the American way of pronouncing words forces you to pronounce them fully and clearly without blending them together which may curb the speed of your speech and facilitate fluency.

Personally I find that pronouncing the ‘r’ and ‘l’ sounds the American way helps with the overall fluency of my speech.

Americans pronounce the ‘r’ sound thoroughly, distinctly, and I guess the easiest way to replicate that sound is to imagine that something is stuck in your throat and you want to get rid of it. Well, it’s not THAT throaty, and you have to ‘move’ the sound from deep inside your throat further up your mouth so that eventually the sound emanates from somewhere between your throat and your lips.

So when you speak American, you pronounce all ‘r’s and I believe it works as an anchor helping you to form sentences and take time to gather thoughts. The ‘r’s can be stretched a little bit longer than necessary (especially when they’re placed in word endings) thus helping you to plan your speech and think of any words you might be struggling to come up with – so you can think of the ‘r’ sound as a hesitation filler!

Same goes with the ‘l’ sound. It’s formed by pressing the tip of your tongue against the roof of your mouth right behind your teeth, and once again – it’s a very distinct and strong sound which helps with your speech formation.

Speaking With a Hot Potato in Your Mouth

I remember from a long time ago when I was a child that someone described the English speech by comparing it with speaking with a hot potato in your mouth.

And it’s actually true, especially when it comes to speaking with the American accent.

When Americans speak, their whole mouth resonates the sounds and it can indeed resemble someone trying to speak while holding something in their mouth. Of course, it’s an exaggeration, and in real life you’ll hardly see any American person speaking with their cheeks inflated.

Anyway, it’s a very powerful technique to get used to speaking with the General American Pronunciation, so I warmly suggest you to imagine that you’re trying to hold something in your mouth while speaking to develop your American accent!

Actually holding a potato in your mouth isn’t the best way to resemble the American accent.

Try to imagine you’ve taken a little bit of water in your mouth, just a tiny bit, and you don’t want to spill it out when speaking. So that half a mouthful of water is sitting at the bottom of your mouth right below your tongue, so you’re forced to speak without letting your tongue to touch the floor of your mouth.

That’s exactly how Americans speak, and it’s the easiest way for a foreign English speaker to develop the American accent.

Let your cheeks resonate the words; you can even put on a mock smile to draw your lip corners back and get your cheeks into the right position.

Anyway, I’ll be making videos in the near future about all these aspects of the General American Pronunciation, so if this is all too confusing, stay tuned and keep checking back to my blog for more information on how to speak like an American!

The bottom line here is – speaking with a potato or water in your mouth and resonating the sounds with your cheeks definitely forces you to speak a little bit slower, you’re forced to focus on the way you form words, so you’ll be less tempted to start speaking too fast which is great for your spoken English fluency.

Stretching the First Syllable of Words

It’s another reason why American English is slower than its European and South Pacific counterparts.

Of course, you don’t stretch the first syllable of EVERY word when you put on the General American Accent; if you did that, you’d sound more like a Southerner (which I’m definitely going to learn as part of my accent missions), that’s for sure!

For now, here are a couple of examples so that you can get the general idea of what I’m talking about here.

So to recap, in order to sound like an American speaking with the General American Accent, you may want to do these three things – pronounce ‘r’s and ‘l’s distinctly, take some water into your mouth, and stretch the words a bit longer than the dictionaries will tell you! 😀

Of course, it’s not going to guarantee you’ll sound like an American right away, but it’s a good start, and I’ll discuss all these things in my future blog posts and videos.

And don’t forget – thanks to these distinctions of the American accent, you’ll speak slower and clearer thus facilitating your fluency (especially if you have a tendency of trying to speak fast and catch up with native English speakers).

Next post: Find It Hard to Speak Like an American? Just Take Some Water in Your Mouth!