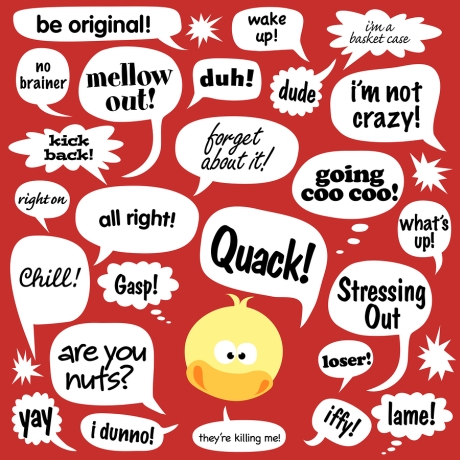 As you can imagine, I’m doing extensive online research while learning the different accents of the English language.

One thing I’ve noticed while browsing the Net for accent related advice is that the two terms “accent” and “slang” are used interchangeably all over the place, and an obvious trend starts emerging:

While there is a certain degree of truth to it, I think this approach misleads a lot of people into thinking that accent acquisition is a mammoth task comprised of ALL POSSIBLE LANGUAGE ASPECTS – vocabulary, phraseology, phonetics and so on.

Personally I find that if you learn one thing at a time, you stand a much better chance at succeeding!

Accent learning is no exception, and in order to speed up your learning curve your initial focus should be solely on your pronunciation. Sure, slang phrases and expressions don’t have to be totally ignored; however, you don’t NECESSARILY have to use them in order to blend into the local society, for example ❗

So basically what I’m saying is that there’s a general misconception out there that to speak with a particular accent means using a lot of slang words and phrases. Nothing could be further from the truth because if you speak with an American accent, for example, and don’t use any slang you’ll still sound like an American which can’t be said if you just use American slang and speak with a hard foreign accent!

Native Speakers Will Still Sound Like Natives Even if They Don’t Use Slang – Why Would Foreigners Be Any Different?

You’ve got to admit that there are certain situations when slang usage would be quite naturally limited to a minimum – even if you’re a native English speaker belonging to a specific accent background.

You wouldn’t use slang in formal situations.

You wouldn’t speak using slang phrases and expressions when dealing with international clients, for example.

And you most definitely wouldn’t use very local slang to communicate with foreign English speakers while holidaying abroad – you’d try to make your speech as simple and easy-to-understand as possible!

You would, however, retain your specific accent in all those situations marking you as an American, British or Irish English speaker, so it begs a question:

“Is it not the accent in particular that makes an English speaker unmistakably distinct?”

I think you don’t have to look for further proof in order to answer to that question. Of course it’s the accent first and foremost that makes an English speaker unique! Just line up a New Yorker, a Brit, a Texan, an Irishman and an Aussie and make them say just one line introducing themselves. It certainly won’t be slang (because they’ll only say something general like “Hi, my name is Mark, and I come from London!”), but they’re definitely going to speak with their respective accents because that can’t be helped – simple as that!

Yes, native English speakers will respond positively if you learn local slang – there’s no doubt about that! I have a firsthand experience in this because I live in Ireland and whenever I use a new phrase or expression I’ve picked up from my work colleagues, my fellow co-workers say things like “That’s a typical Irish way of saying it, fair play to you!”

It’s nice, but that’s all there is to it.

Just using those phrases and expressions will never make me SOUND like an Irishman.

When I start my Irish accent learning mission (if all goes according to the plan, it’s going to happen early next year), I’m not going to focus on slang.

I’m going to focus on PRONUNCIATION and while my accent practice is most likely going to include some natural slang acquisition, it’s definitely not going to be my primary focus.

Learning to pronounce ‘th’, ‘l’ and ‘t’ sounds the Irish way PLUS the intonation and changing vowel sounds – all that demands A LOT OF SPOKEN ENGLISH PRACTICE. I’m going to be busy enough making sure I pronounce words the proper Irish way and make it my second nature, so why on Earth would I make it even more difficult by trying to learn local expressions and slang?

One might think that there are dozens upon dozens of slang expressions and words one has to learn in order to sound like an American, a Brit or an Irishman.

I personally don’t think so! 😉

You only need a handful of expressions for starters to sound like a typical Irish person, for example.

To explain that you’ve just done something, you can use a unique Irish grammar construct “I’m after (doing something)”; for example

“I’m after making the same mistake again!” simply means you just made another mistake.

And you can stick the word ‘sure’ in pretty much every sentence to make it sound more Irish:

“How are you, are you doing all right?”

These things can be acquired in no time, and you can make them your second nature within a matter of a couple of days!

Of course I’m not saying that’s all there is to Irish slang and phraseology, but the point I’m trying to make here is the following:

Just a few starter slang phrases and expressions will create an impression about you as a speaker of the particular English dialect whereas the same can’t be said if you only master to pronounce a few words in your target accent with the proper pronunciation!

Pronunciation – not slang! – is the decisive factor that’s going to determine your success in mastering particular English accent (American, British, Irish or Australian), so that’s what you should focus most of your efforts upon!

Thanks for reading my blog,